“The failure to substantiate the accusation against Taner comes as no shock. What is shocking is that it has taken more than a year for this police report to be submitted, and during that time Taner has been locked behind bars,” said Salil Shetty, Amnesty International’s Secretary General.

“Without a shred of credible evidence presented to substantiate the absurd charges made against him, Taner must now be released. The charges and his detention fly in the face of justice and must be brought to an end once and for all.”

Taner’s trial, and that of 10 other human rights defenders, resumes in Istanbul on 21 June.

Taner was initially detained by police on 6 June 2017 and later charged with “membership of a terrorist organization.” The central accusation against him is the claim that he had downloaded ByLock, a messaging app the state claims was used by the Gülen movement, who the authorities blame for the 2016 coup attempt.

However, after more than a year the Turkish authorities have still not been able to provide any credible evidence to substantiate this allegation, or indeed any criminal wrongdoing.

The police report - seen by Amnesty International – reveals that forensic examinations were carried out on Taner Kılıç’s laptop, mobile phone, three USB sticks, a SIM card and a memory card. ByLock does not appear on the list of items found on the phone, including deleted applications.

This corroborates the findings of four independent forensic reports previously submitted to the court. All found no evidence that Taner had downloaded or used the ByLock app.

“Nothing can bring back the precious moments that Taner has missed, like his oldest daughter’s graduation, or he and his wife Hatice’s 25th wedding anniversary. The court can put an end to this injustice on 21 June and allow Taner to return to his family and resume his vital work,” said Salil Shetty.

“Taner has become a potent symbol of what is happening in today’s Turkey where many human rights defenders spend their days either languishing in jail or living in constant fear of being imprisoned for months or years. It is high time to end this relentless crackdown on human rights.”

For Amnesty International’s analysis of the case against Taner Kılıç see - https://www.amnesty.org/en/documents/eur44/7331/2017/en/

Taner Kılıç, was detained on 6 June 2017 and sent to jail three days later, where he has been ever since. Ten other activists, including İdil Eser, the Director of Amnesty International Turkey, were detained a month later. Eight of them were held for almost four months before being released on bail at their first hearing in October.

They are all accused of “membership of a terrorist organization”, a baseless allegation for which the prosecution has yet to provide any concrete evidence that would stand up to scrutiny.

Last December, Turkish authorities admitted that thousands of people have been wrongly accused of downloading ByLock. They published lists containing the numbers of 11,480 mobile phone users, leading to mass releases. Taner Kılıç is not yet among those listed for release.

More than a million people from 164 countries and territories have signed Amnesty International appeals demanding the release of Taner Kılıç and the other human rights defenders since their arrest last summer. Scores of well-known figures have called for the release of Taner and the dropping of charges against the Istanbul 10. 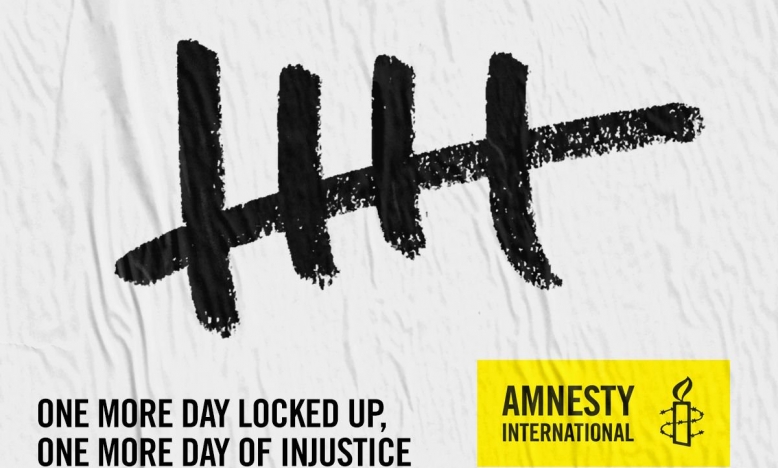 Development by KOBA
Design by Oswalt & //07